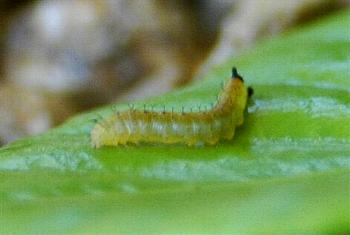 These Caterpillars when they first hatch are pale green with a short black tail horn.. 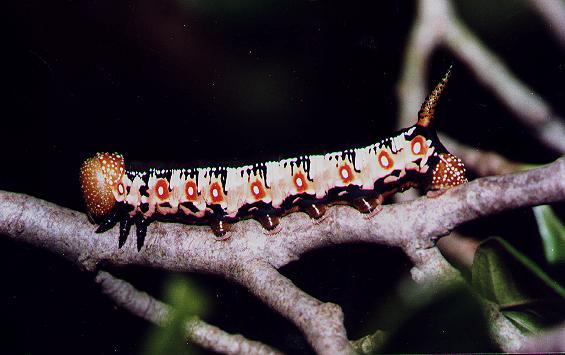 The Caterpillars later become black, grey, or green, often with black lines across the back. The back of the head and the final claspers are covered in small white warts. The caterpillars have posterior horn shaped like a shallow ‘S’, and have white spiracles along each side outlined in red. The head colour varies from brown to green.

These Caterpillars have usually been found feeding on plants in RUBIACEAE, including:

but they have also been found on :

The Caterpillars pupate under the soil. The pupa is naked and dark brown, with a length of about 5 cms. 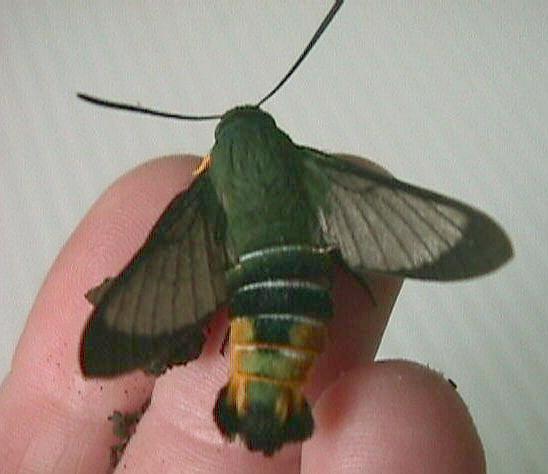 The adult moths are initially a dirty green colour, but soon lose the scales from the wings, leaving them transparent.

The moths then resemble Bumble Bees, hence the name ‘Bee Hawks’ for the moths in this genus Cephonodes. The green colour of the thorax fades to brown in older museum specimens. The abdomen is yellow with a black band around the first few abdominal segments, and a dark mark on the next segment. There is a black fringe around the tip of the abdomen. The wings are generally transparent except that the forewings each have a broad opaque area near the tip.

The moth has a wingspan of about 4 cms. The moths hover over flowers to feed on nectar, beating their wings so fast that they hum, and are a blur.

The eggs are pale green, smooth, and oval. They are usually laid singly on the undersides of young leaves. The eggs have a diameter of about 0.5 mm.

The species is found over the northern two thirds of Australia.