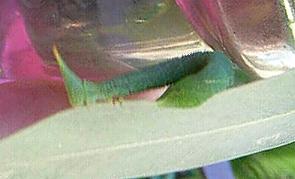 The caterpillars grow to a length of about 12 cms. They feed on the foliage of various species of :

The pupa is dark brown and has a length of about 7 cms. It is formed in a sparse cocoon in the ground litter.

The adult moths have forewings that are light and dark brown with a variable wavy pattern, and hindwings that are orange with a brown trailing edge. The moths have a wingspan of about 12 cms. They are found over much of Australia, including: