This species is presumably named after the great King Aegeus of Ancient Greece.

Although this Caterpillar is a pest on suburban Lemon trees, it is one of the most interesting Caterpillars in Australia, Both its structure and its behaviour have evolved to an extraordinary degree to give it protective mechanisms against predators. It also grows into one of the largest butterflies to grace suburban gardens. 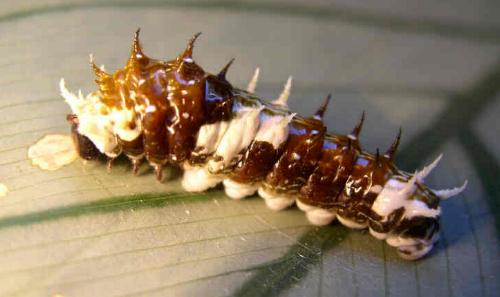 The early instars of this Caterpillar are kite shaped, and dark brown with three white patches: one on the thorax, one above the the first pairs of prolegs, and one on abdominal segments 8 & 9. It is covered with black or white tubercles. The young Caterpillar often sits by day on the top of a leaf, and resembles a bird dropping. Later instars are green with white diagonal patches. 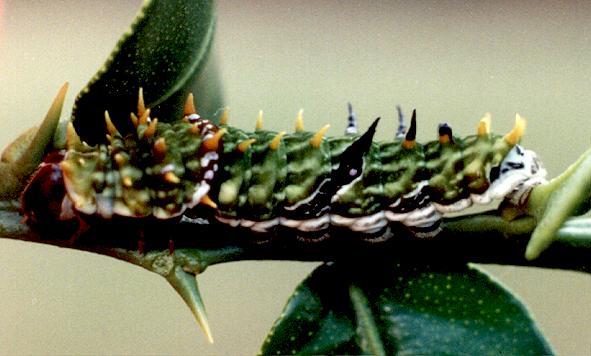 The last instar reaches a length of 6 centimetres, and is coloured yellowish green with narrow stripes or patches running obliquely upward and backward from the lower edge of the thorax to segments 4 & 6. These stripes vary in colour from pale brown to white, and are edged with iridescent mauve or blue. 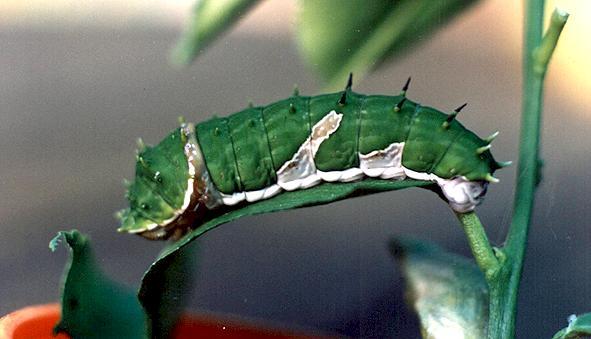 The Caterpillars are commonly found on the introduced members of the RUTACEAE family:

They have also been reported to feed on various Australian native plants in this same family ( RUTACEAE ) such as:

They have also been reported feeding on plants or accepting leaves from plants from other families, including:

When disturbed, the caterpillars are inclined to rear up at the front, evert a red osmeterium, and produce a citrus smell. 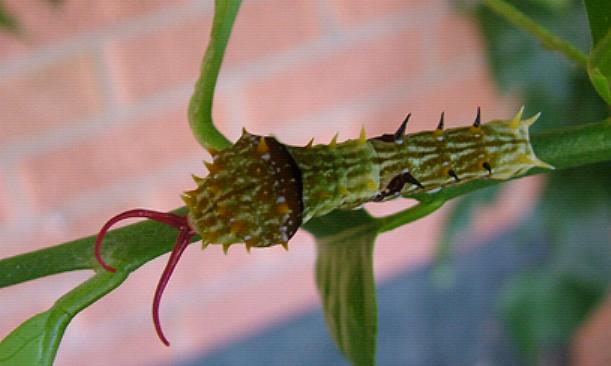 There is evidence that the production of the smell is not actually related to the food plant, or to the erection of the osmeterium, but is a separate behaviour.

The Caterpillar is a very noisy chewer, making enough sound sometimes to be found by sound alone.

The pupa is quite stout, and is grey, green or brown. It is secured to a stem of the foodplant by a cremaster and girdle. It looks remarkably like a leaf. Metamorphosis may take from one to six months, depending on the season.

The adults have a wing span around 12 cms. The male and female butterflies differ slightly. The male is basically black with white or cream patches and a red spot on each hindwing. The underside of the hindwings have less white and more red patches with small blue crescents.

The female is similar but browner, with a large white patch on the forewings showing brown veins. Her hindwings each have a row of red crescents and two blue crescents.

The eggs are white and spherical, with a diameter of about 0.5 mm. They are laid singly on top of a leaf or shoot of a foodplant.

Various races occur in Indonesia, the Solomons, and New Guinea. The subspecies aegeus is common over the eastern half of mainland Australia, including

This species is featured at Coffs Harbour Butterfly House. Butterflies of this species may be purchased for release at weddings etc.