The eggs of this species are bottle-shaped and pale yellow, laid singly on the undersides of the leaves of the foodplant.

At first the Caterpillar is cream with a black head. Later the Caterpillar develops yellow, white and black rings circling the whole length of its body. It also develops two pairs of black tentacles protruding from its back: a long pair on its mesothorax, and a shorter pair on its eighth abdominal segment. These tentacles are soft and in no way dangerous. The Caterpillar feeds on various plants that have a poisonous milky sap. The Caterpillar appears to retain the poisons in its body making it unpalatable to predators. In Australia, its foods are all from the Milkweed family ( APOCYNACEAE ), including :

It pupates hanging by its tail-like cremaster on the stem or leaf of its foodplant. The pupa is green with a band of shiny gold spots extending half way around it. 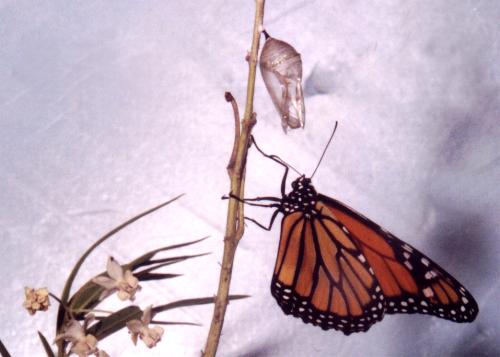 After about three weeks in summer the adult emerges. It is orange-brown, with black veins and a black and white spotted band all around the wing margins The upper and lower surfaces of the wings are similar, except that the undersides of the hind wings are yellow rather than orange.

The main difference between the male and female butterflies is that the males have a ‘sex mark’ on the hindwing. This looks like a swelling in one of the veins which runs from the dical cell to the termen. Females also tend to have broader black veins than the males. The wingspan is about 9 cms.

This species is only a recent arrival in Australia. The earliest report is dated 1856 in Sydney. A drawing dated 1878 done in Sydney is held by the State Library of Tasmania. The species was originally from America. It reached Hawaii in 1845, and England in 1876.

In America, the adult butterflies perform extensive migrations to equable areas in which to pass the winter. Populations in the North-West migrate to Monterey in California to overwinter. The overwintering grounds of the Eastern populations were only discovered in 1975, when they were located in a mountain area in Mexico. This was the climax of four decades of research by Dr. Fred Urquhart (National Geographic Magazine, Vol. 150, No. 2, August 1976). Similar research involving the release of marked butterflies has been carried out by the Australian Museum in Sydney, to investigate possible migrations in Australia. 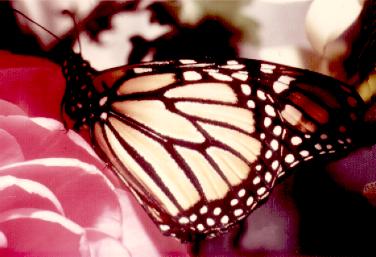 It may be found in all states of Australia, including

The species is featured at the Coffs Harbour Butterfly House.
Butterflies of this species may be purchased for release at weddings etc, from various breeders including: