The early instars of this Caterpillar are gregarious, feeding by day. Later instars are solitary. They occasionally may be seen in procession, each following the silken thread left by the one in front.

The Caterpillar is dark grey and hairy. Its head capsule is white with red sides bordered with black. The true legs are red and the prolegs are orange. There is also an orange lateral line along each side, with a row of orange spots above it. The body is speckled with yellow dots. A pair of long white hairs project diagonally forward from the thorax.

The Caterpillar feeds on various species in MYRTACEAE, including :

The Caterpillars grow to a length of about 3 cms.

When the Caterpillar is mature, it crawls under the soil to pupate. In Melbourne, the adult moths emerge about four weeks later. 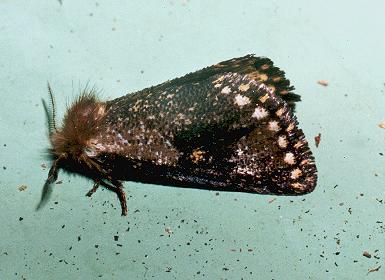 When the moth is threatened, it is inclined to lie down and look dead, with its wings lifted high and the abdomen curved under, displaying this orange tuft. 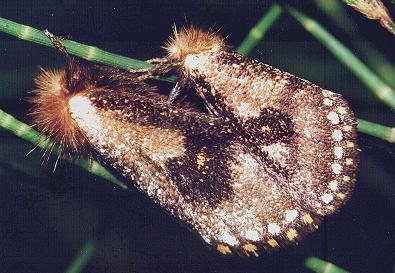 The Caterpillars of this species are difficult to distinguish from those of Epicoma melanospila. However on rearing them through, the adult moths are easily distinguished.

The species occurs in