The eggs from which this Caterpillar hatches are cream coloured and laid with random spacing on the leaves of a foodplant. The egg develops a rusty-brown ring after one day. The Caterpillar eats its way out of the side of the egg.

The Caterpillar is very colourful, being mainly pale bluish-green. The head is pale mauve, with a purple line on each side, and a large purple spot above each antenna. The lines on the head join dorsally and extend along the body as a single mid-dorsal line. This is clearer on early instars. In final instars, the line is wide on the thorax, but is narrower and fainter towards the rear of the abdomen. A yellow lateral line extends from the thorax to the tail on each side of the body. A row of purple spots beneath this line give the Caterpillar a striking appearance. The Caterpillar has four pairs of ventral prolegs. It usually rests with its head down and its thorax raised, grasping the leaf with its prolegs. When disturbed, the tail and head ends are raised. 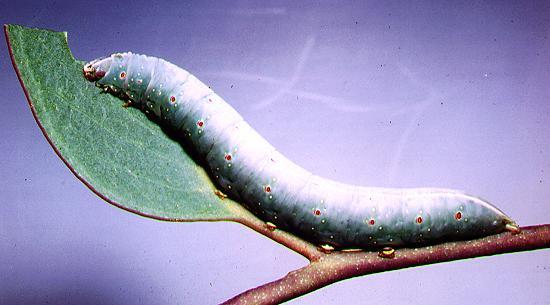 Our specimens accepted leaves of:

Our specimens were similar in appearance to the Caterpillars of Sorama bicolor, but Destolmia lineata appeared to:

The Caterpillar pupates in the soil. 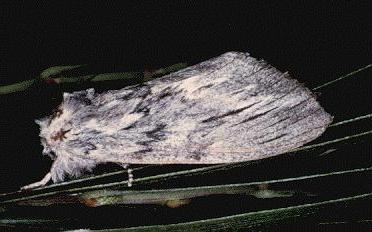 The adult moth is fawn tinged with grey. The fore wings have black zig-zag marks in the basal area, and black longitudinal streaks in the outer area. The moth rests with its wings held roofwise, looking rather like a moth from the family COSSIDAE.

The species is found over most of mainland Australia, including: 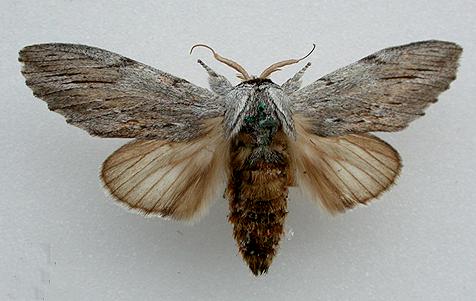