This Caterpillar is spectacular in appearance. The head capsule and the body are brown, and the sides of the body are marked with white. There are white patches on the thorax, white diagonal lines on the abdomen, and white dots all over. These white markings are yellow on early instars . There is a black dorsal horn on the eighth abdominal segment, behind which the abdomen is swollen and grey-blue in colour. Early instars appear to have a disproportionately large head, and sparse thick black hairs. Later instars lose many of the thick hairs. 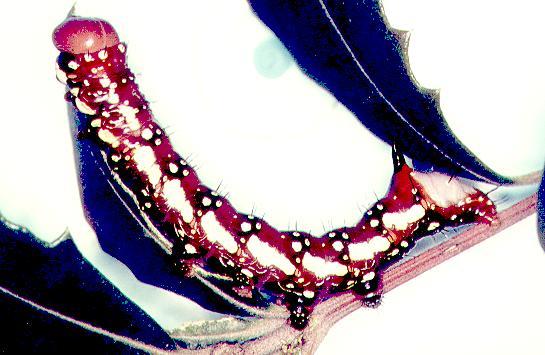 The Caterpillar lies along a twig or leaf when feeding and resting.

When disturbed, the Caterpillars head and thorax are raised so that the true legs are pointed forwards. The rear end may also be raised, and then the body is ‘U’ shaped, with the prolegs pointing backwards. This ‘U’ shaped posture is assumed when the foliage around the Caterpillar is moved. When threatened, the Caterpillar also projects an osmeterium from under its prothorax. This is dark red and is forked at the tip.

The Caterpillars feed on the leaves of various members of the plant family PROTEACEAE, including:

The Caterpillar grows to a length of 6 cms.

It pupates in a cocoon in the ground litter. Specimens which pupated in November in Melbourne emerged as adults four weeks later. 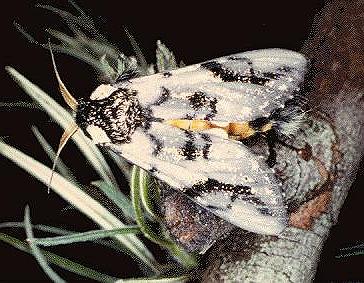 The male moth when disturbed adopts a characteristic posture. It lifts the wings, and curves the abdomen underneath the body, displaying rings on the abdomen and red structures near the tail. 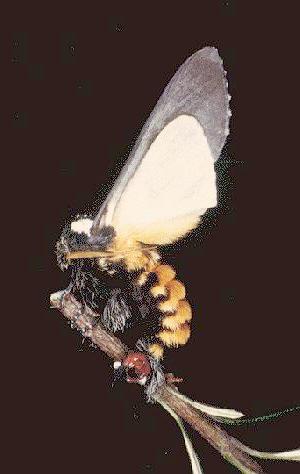 The eggs are white and dome shaped, and laid on the surface of a leaf of the food plant. Eggs laid in April in Melbourne took six days to hatch.