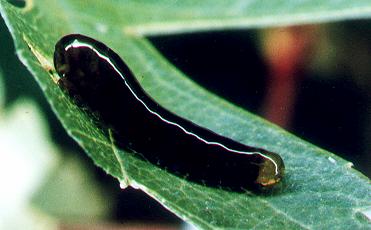 These are not true Caterpillars or slugs, but are the larvae of a Saw Fly (which is a Wasp, actually!). They are black with a white line, and with a yellow head and tail. They appear to have no legs, and slither about on their food plant, which can be many species from the plant family ROSACEAE :

They grow to a length of about 1 cm. They pupate in a cell in the soil.

The adult is a little black wasp, with a wingspan of about 1 cm.

The female wasp slits the leaf of a host plant between the upper and lower surfaces and lays the eggs inside the leaf.

The species is found worldwide, for example :

Control has been attempted using :