The Caterpillars of this species live in burrows they dig in the ground. Typically these are under Wattle bushes (Acacia species). They line their burrows with silk. They feed nocturnally, crawling out of their burrows to feed on leaves.

They pupate in their burrow. When the moth is ready to emerge, the pupa wriggles to the top of the burrow, and the empty skin is left poking half out of the burrow after the adult moth has departed. 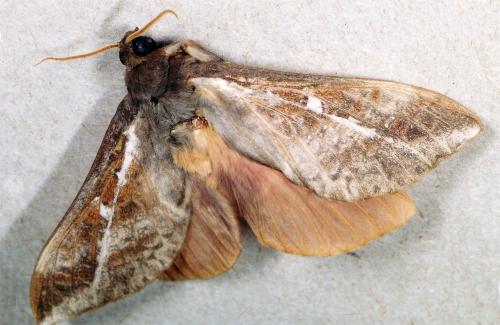 The adult moths are dark brown with a white line along each forewing with variable white shapes along its length. The hindwings are red near the base, fading to pale orange at the margins. The moths have a wingspan of about 6 cms.

The species is found in