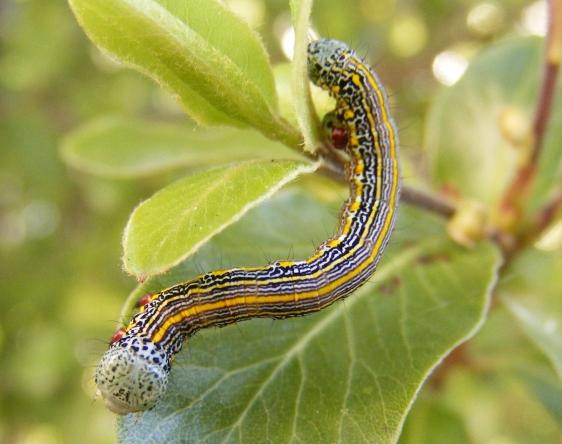 This species has been recorded as feeding on over 17 species of unrelated plants, including:

and has also adapted to feeding on the introduced

to the point where it is a pest in pine plantations.

The species has been studied to discover how and why it is so polyphagus. It was found that the mean pupal size of was significantly reduced by feeding on Pinus radiata (a non-native plant host) compared to two native host plants (Eucalyptus obliqua and Acacia mearnsii). The main reason for this seemed to be the higher ratio of dry weight to wet weight of plant material in the native plants compared to the introduced plant species; the larvae on Pinus radiata simply could not get enough nutrient to catch up to those feeding on the native plant species. So given that it develops poorly on such plants, why does it continue to use them for food?

It appears that the polyphagous nature of this species may be related to the dispersal behaviour in this group.

First instar larvae are active dispersers, and spend the first two days of their life moving about by climbing to the top of the plant upon which the eggs were laid, spinning a silk balloon, then ballooning to other plants. The choice made by adult female moths appears to have little effect on the host that the larvae end up eating. Larvae must feed within two days of dispersal; whatever plant they end up on at the end of two days dispersal becomes their food plant, hence the ability to cope with eating very different host plants appears to be an adaptation to this mode of dispersal. 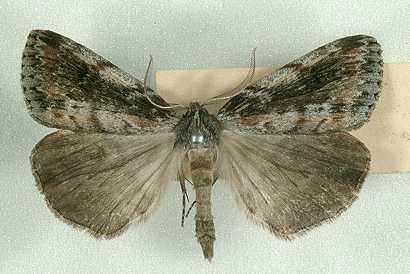 The adult moths are grey with variable darker markings on the forewings.

Adult females do not fly very far from where they emerge from pupae, and lay large egg masses (around 200 eggs) on the top of plants. The eggs are oval and finely dimpled all over. They are initially white, but turn purple as they approach hatching.

The species is found in

Catherine J. Young,
Characterisation of the Australian Nacophorini and a Phylogeny for the Geometridae from Molecular and Morphological Data, Ph.D. thesis, University of Tasmania, 2003.