The Caterpillars of this species live in tunnels in the ground. They feed on sap from the roots of :

The animal is cylindrical, white, and has a brown head. It and the Caterpillars of several other related species have been used as food and as medicine by Australian Aborigines, and are important subjects in Aboriginal Art. The Caterpillars are usually eaten cooked, and a number of modern recipes for them have been devised. 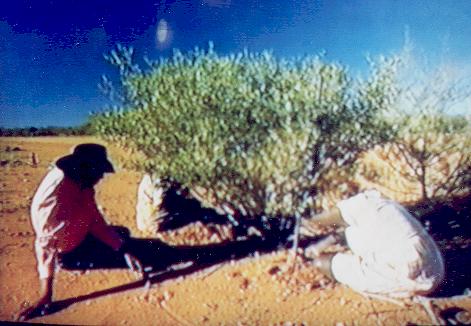 Digging out larval tunnels around roots of Wijuti Bush

The Caterpillar grows to a length of about 7 cms.

It pupates inside its tunnel.

The adult is a large finely mottled grey moth, with wings suffused with rusty red towards the bases, and with a wingspan of about 16 cms. It has degenerate mouthparts, and so cannot feed. It relies for energy totally on the nourishment taken in by the Caterpillar earlier in its life.

The species has been found inland, including:

Many people have wondered about rearing the Caterpillars commecially. This could be possible if one could catch a gravid female, and provide the Caterpillars with an artificial food medium, perhaps like the bark/clover/carrot diet given by Rachel A. Allan et al. for rearing Wiseana copularis.