The caterpillars of this species are buff coloured, with a brown and buff patterned head. They bore into the trunks of :

They bore down to the roots, making a borehole with a length up to 1 metre. When the caterpillar is fully grown, it bores another hole this time in the soil, from the root up to the surface, which it lines with silk and frass. It pupates at the bottom of this tunnel. After metamorphosis: it climbs up to emerge into world above, leaving the empty pupal case sticking out of the ground. The adult moths have forewings that are speckled grey and brown with indistinct light and dark streaks. The hindwings are reddish-brown at the base, fading to grey-brown at the margins. 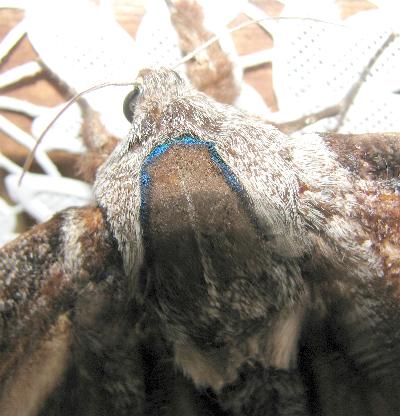 The thorax of the adult moth has an uncanny likeness to the head of a mouse! The ‘eyes’ of the mouse are the thicker parts of the bluish lines running on either side of the thorax, located just behind the real eyes. One can also see perhaps the face of an old man with a beard. Maybe these likenesses to faces help deter potential predators.

The adults of Endoxyla encalypti have been found from Tasmania to Queensland. They occur around the Gippsland Lakes in Victoria in February, and Wayne Jeffery caught his specimen New South Wales in November.