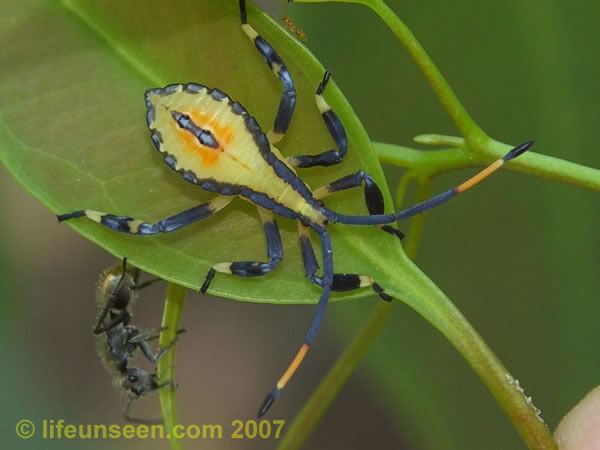 Species documented in 1852 by Dallas.

Usually ranging between 15 to 25 mm in length, the eucalyptus tip bugs are stocky shield shaped bugs. Adults of this species are brown to black, with a yellow to green tipped wing cover. They also possess a short spine on each shoulder.

The instars are brightly coloured, ranging in colour from yellow to orange bodies, with blue or dark blue colourings.

Kumar (1966) reported the eggs of this species took between 6 to 15 days to hatch. Kumar found adults of this species in December to April in south-eastern Queensland. Nymphs were encountered in other months of the year, which he deduced there were perhaps several generations each year.

Adults of these species are now reported to be found from October through April, especially on warm sunny days.

Found throughout Australia, but appearing to favor warmer climates. Can be found on many varieties of eucalypts, especially on new shoots or tips.

Coreid bugs (belonging to the family Coreidae) have powerful sucking mouthparts which allows them to suck the sap from the soft tissues of plants. This particular species, as the name suggests, favours eucalypts.

They are known to feed on Eucalyptus acmenioides, E. blakelyi, E. drepanophylla and E. grandis. They are however, assumed to feed on more species than this (Steinbauer et al, 2002).

Coreid bugs can emit a foul odour or liquid if disturbed to deter potential predators.